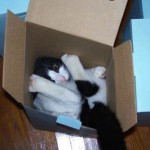 Cancer in cats is on the rise, alarmingly so. And the cancers that cats get tend to be aggressive. One of the most common varieties is lymphoma, which is associated with leukemia. Other types include oral squamous carcinomas, a soft tissue tumour called fibrosarcoma and injection site sarcomas (those that occur at the site of the injection).

With such aggressive, and usually fatal diseases, people naturally want to try to prevent them from occurring. Taking the advise of their vets, they vaccinate their cats religiously every year. And they feed the commercial cat food recommended.

By following this professional advice, they are actually contributing to the very diseases they are so desperate to prevent.

Vaccines bypass all the subtle and natural ways the body deals with a pathogen attempting to gain a foothold. If the body’s immune system is not strong enough to prevent that pathogen entering, then as a last ditch effort, the body develops antibodies in the blood. At least, it will be a little more prepared the next time.

So, by injected a virus into the body of a healthy cat, you are lowering the immune system. The message is clear to the body – I was not able to throw out an invading pathogen.

But that’s not all. The ingredients of vaccines and the process of developing them is questionable to say the least. Ingredients such as mercury, aluminium, formaldehyde, squalene, cross species tissue are at the top of the list. Any health conscious person will know about the effects that mercury, aluminium and formaldehyde has on a body. And they will at least be wary about putting the cells from other species into a body.

In addition, multi vaccines are common. Three, four or five pathogens are found in one shot. This puts a tremendous load on to the body. A body will naturally only ever have to deal with one health problem at a time. It can’t cope with more. If a new disease is superimposed on top of an existing one, the weaker one will become dormant until the stronger, and so more serious, disease is dealt with.

To top it all, cats are frequently vaccinated when they are undergoing surgery, such as sterilisation. The surgery on its own is traumatic – the invasive soft tissue damage, the anaesthetic plus the target of the surgery. To add a vaccine at this time can put the body into overload.

So the vaccination process has lowered the immunity of healthy cats. This means they will be less able, not more, to fend off diseases in the future. A lower immunity can give rise to chronic disease, including cancer in cats.

Although on the surface vaccines appear to prevent diseases, there are at least two areas you may not know about. In medical circles, the term wastage is used to indicate those who show adverse effects to the procedure. The ‘wastage’, ie those who show a severe neurological reaction to the vaccine or die from it, is accepted. It is felt that this is acceptable for the greater good. The percentage varies with different vaccines or procedures.

Most vets are in denial about adverse reactions to vaccines, so the ‘wastage’ numbers cannot be accurately determined as they are not reported. I do not know of any website where you can find detailed cases of the ‘wastage’.

It is known that virus’ do change after vaccines. They don’t die, they mutate. This means that the symptoms are often different from the original disease, so it is not suspected. Instead a new disease is ‘discovered’, but the origins can be traced back to the first virus. For example, Dr Richard Pitcairn, an American homeopathic vet claims that the deadly parvo virus is a mutated form of the less serious distemper virus.

Vaccines are wonderfully lucrative to both the drug companies and the vets. The enormous profit made from them finance the ongoing advertising campaign that ensure they remain a priority in pet owners minds.

There is yet another side to vaccines. You can discover this from the following short video. Although it is talking about human vaccines, animal vaccines follow the same principle. Merck – cancer viruses in vaccines

What can you do? Start by feeding your cat a species-specific diet. This raises the immune system, making disease less likely.