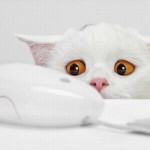 worms can be a problem. There are two main types. The roundworm is normally limited to kittens. Once treated, it won’t return. You know if they have it, as they vomit them up. It looks like they just had a meal of spaghetti.

The other common worm is tapeworm. This appears as tiny grains of rice in the stools. Initially they will move, but they die quite quickly when exposed to the air. Then the colour changes from white to yellowy.

It is generally considered that tapeworms are picked up from cats eating animals which are infected with tapeworm. But I disagree.

It is my opinion that every single health problem, including fleas and worms are a direct result of a compromised immune system. If your cat has a good healthy immunity, the worms will be in the quantity which is natural.

Bowel flora is totally natural. Some worms are beneficial. It’s the proliferation which is unhealthy.

When cats are fed a diet of processed food, this is not easily digested. It hangs up in pockets of the intestines, creating perfect opportunities for the worms to breed to excess.

Natural food, on the other hand, digests quickly. It moves through the bowel quickly, creating little opportunity for the worms to do anything that is not normal and natural.

Getting to the cause of any problem and dealing with that is so much more efficient than simply dealing (mostly badly) with the effect.

A natural diet is one that cats evolved on, long before we arrived on the scene. It’s the optimum diet for a healthy immune system. It cannot be improved upon.

Here you can learn more about achieving a natural diet for your cat.