When I first became interested in a natural diet and health care for my animals (many years ago), including cats health, I was invited to a public talk, given by my veterinarian. She was heavily into alternative health care and soon after, she gave away the veterinary side of her practice all together. 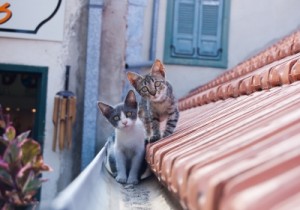 Even though this resulted in a substantial income reduction, she felt she could no longer carry out procedures which she knew to be harmful. Her biggest bug bear was vaccination.

Her talk inspired me. She narrated how she had been visiting a relative overseas, who wanted her to treat her cat.

The cat was very timid, spending much of the day hiding under the bed covers. Geraldine, my vet, observed that this was exactly how her relative, Odette was. She was hiding at home, hardly daring to leave her home unless it was absolutely necessary.

Geraldine was an old hand at observing the similarities between people and their pets, so she set about treating Odette, rather than her cat. She decided to use the Bach Flower Essences.

Odette kept in touch, and over the coming weeks and months, reported her progress. She was becoming increasingly brave, venturing out and about at an increasingly regular rate.

AT THE SAME TIME, almost in step with Odette’s improvement, her cat started venturing around the house and then outside. He even wanted to spent a night outside on occasion, something that was completely unusual as it was formally very fearful for him.

And yet, he had received no treatment AT ALL!

Why am I telling you this?

Natural therapists know only too well that animals seem to take on the  same attributes as their humans. It’s as if they are helping us carry the load, by sharing it. Or perhaps they are reflecting back to us, who we are.

Whatever it is, your health is inextricably linked to that of your cats.

If you want the best for your cat, then the first thing to do is to start by sorting out your own problems. Lighten up. Seek appropriate health care, preferably holistic, preferably homeopathic. By sorting yourself out, you have gone a long way to sorting out the health of your cat.

Are you interested in knowing more about improving your health naturally?

« Previous Post Can You Separate Your Cats Health from Your Own? Next Post » Wellness Cat Food – Seven Reasons Your Cat Needs it Now

6 replies to "Can You Separate Your Cats Health from Your Own?"