Cats with cancer, as with anyone, is very often the last effort of an exhausted body trying to heal itself against all odds. It’s an accumulation of bad, and then very bad, practices, none of which support the body or even respect the body’s natural wisdom.

It’s amazing to me that we all manage to still exist in this highly toxic, disrespectful and deeply misinformed world. It’s tough on us, but even more tough on our four legged companions who are forced to participate in the latest fashion in health care.

At least we humans have a choice (sort of, with all the attempts to misinform).

Cats with cancer have been harbouring this for years. It doesn’t suddenly happen. It can appear and deteriorate quickly, but underneath, it’s been growing for years.

At each stage, it could have been reversed, eliminated, healed, cured. And it still can, even at the end stage when the vets tell you it’s kinder to kill. They say that because they have no idea how to help. They’ve exhausted all their drugs, and your bank balance. Now they have nothing.

When you know the cause of anything, you are empowered to take proactive action. Not knowing the cause leaves you feeling helpless and reliant on others you believe (or hope) know better. But their motives may not be quite as honourable as yours.

Disease is caused by three main factors, according to all true holistic philosophy, including the latest science of epigenetics.

Starting with the diet, the commercial pet food is the lowest form of dregs from the more lucrative human market. Off cuts, unusable parts, diseased or dead animals from a variety of sources end up in rendering plants for processing.

To bulk this out, ‘grain free’ plant based food is added as it’s cheap. Tapioca is a favourite. For our feline carnivores?

Because this is known to be very poor nutritionally, the ‘food’ is fortified. Mostly with synthetic, laboratory made (often from petro-chemicals) ‘nutrients’.

To keep the product on the shelf for years, preservatives are added. The really toxic ones that would never be allowed in human food. Even when the label tells you there is no added preservatives, all that means is that the brand didn’t add it themselves. It could be in the rendered food they buy in.

The mainstream health care really should be termed disease/sick care. Just look around. Cancer is on the rise as is heart related problems. And to top it off, iatrogenics (death by prescription) is the THIRD leading cause of death in the western nations.

Someone’s having a laugh.

Vets are trained by big harmer and big pet food. They aren’t eclectic by any stretch of the imagination. All they know is what the drug companies want them to know. And it’s tough for the vets to turn their back on a highly lucrative career, especially after years of hard slog. Even when they know they’re not doing any good.

Drugs suppress symptoms. They don’t cure. Ailment after ailment of the cat trying to stabilise their health are pushed back down by drugs they are forced to take.

And still the cat tries to live, tries to cope the best way they can.

Can you get an inclining now why cats with cancer are on the rise?

Cats are independent by nature. They are capable of living in most environments, from the hot and arid to the cold and wet. They are very successful hunters.

What they’re NOT capable of is living in a toxic soup of EMF, air laden with chemicals off-gassing from furnishings and cleaners, no access to the outside, the healing sun, the grounding earth.

How To Cure Cats Cancer

Even in the really late stages, these measures can help.

Feed your cat according to their evolution.
Use holistic health care, such as homeopathy, for all their health needs. Homeopathy supports the body’s wisdom and restores the vitality of the immune system.
Use natural cleaners, air the house with fresh air as regularly as possible, switch off WiFi when not in use (eg at night, out at work, etc), keep your phone well away from your cat.

Changing habits and lifestyle may not be easy, but when you have a reality check, it gives you the incentive to act.

Cats with cancer do not have to be killed as your vet will tell you. They don’t know otherwise. But now you do.

How To Keep Your Cats Teeth Healthy 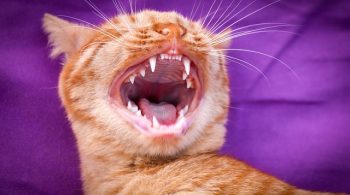 How To Keep Your Cats Teeth Healthy