Declawing cats is such a cruel procedure, it has been banned in many countries, including many European countries and Australia. However, it still remains legal in most states of America. 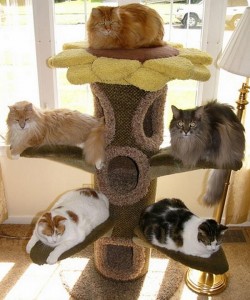 People entertain the idea of declawing a cat for perhaps two reasons. They feel their young children will be safer and their furnishing won’t be mauled.

Let’s look at this issue from the cats point of view.

Declawing cats is the same as de-nailing you. Pulling nails off is one of the most extreme tortures used. The finger tips are rich in nerves, to allow very sensitive information to be gained from a very light touch.

When the anaesthetic wears off after the operation, the paws will be very sore. Nerve pain is supposed to be one of the worst pains there are. Pain killers rarely touch it.

Phantom pain, that many amputees suffer with, is a very real possibility, even though the cat cannot tell us. This often never goes away.

Because of the immediate pain, the cat will find walking difficult and will naturally walk on the back of their feet, rather than on the front. This shifts their whole weight bearing ability, creating musculo-skeletal problems later on in life.

In the days that follow the operation, they will avoid anything that makes the pain worse, including using a litter tray. This can inevitably set up bad habits in the future.

A naturally happy cat will only use their claws when they are angry or frightened. Children, unless closely monitored, can easily frighten, or anger, a cat. When a cat defends herself with her claws, this is a warning sign – ‘back off, or I’ll be more forceful”.

Children need to learn boundaries when dealing with animals. Left to their own devises, animals are far better at teaching children these boundaries, than people are. They rarely use excessive force. Young children learn very quickly.

A declawed cat is more likely to use her teeth to get the same message across, negating your attempts to protect your children. In most cases, the use of their teeth is more severe than their claws.

Declawing cats shows great insensitivity to the needs of the cat. A contented cat, one with all her natural needs satisfied, is never going to use her claws unnecessarily. When she does, you need to ask yourself why. Then resolve that issue, so she doesn’t have to again.

If you have a declawed cat, the homeopathy can help your cat’s pain.

11 replies to "Declawing Cats Is A Painful, Cruel And Ineffective Procedure"