In this day and age of the mighty dollar masquerading as king, it becomes more and more difficult to trust businesses who have a vested interest in gaining your sale. As cats can’t talk to us, or perhaps I should say, as we can’t hear what cats are telling us, we don’t have that all important input to know if we are providing our cats with a healthy cat food. 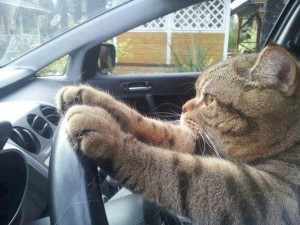 If you do a quick search on the internet, you’ll come across practically all pet food manufacturers proclaiming their brand is ‘all natural’, ‘healthy’, ‘holistic’, even ‘organic’, but in every single case they are selling dry food.

Just think about it for a minute. Dried food which contains any form of meat just won’t keep at room temperature. Try keeping your steak out of the refrigerator for a few days and see what happens.

So how do pet food manufacturers keep cat food indefinitely at room temperature?

The only possible way to do this is to add preservatives. Despite many claims saying there are no preservatives, logic tells you there has to be.

Cooking in itself may preserve meat a little longer than raw meat, but not for weeks, or even years.

So what, you may be thinking, I know there are preservatives in some of the foods I eat and I seem to be OK. Surely a few preservatives doesn’t mean I’m not feeding my cat a healthy cat food?

I personally don’t think any preservative is OK. It may appear to be harmless in the short term, but in the long term there will be consequences.

But apart from my personal opinion, there are some laws, perhaps rather basic or not well enforced, in almost every country around the world, that protects human food. So all preservatives used in human food has to be considered ‘reasonably safe’ by some standards.

Unfortunately, there are no such safe guards in pet food. Or the laws are even less effectively enforced than the human laws.

Ever heard of formalin? Embalmers use it to preserve dead bodies.

Formalin, also known as formaldehyde, is widely used in pet food to preserve it.

You probably haven’t heard of ethoxyquin. That’s a preservative used in the rubber industry. It’s in the tyres of your car. So what on earth is it doing in your cat food?

Lets look at ethoxyquin’s history. When factory workers were exposed to it, they exhibited side effects similar to those of agent orange:

Are you getting a bit concerned? Perhaps your cat is suffering from some kind of organ damage? Here are a few other common preservatives used in cat food to keep it at room temperature indefinitely;

No manufacturer can keep preservatives out of dry cat food if it has a long shelf life.

So, if you don’t feed your cat a commercial cat food, what can you feed her?

To my way of thinking, the only sure way of knowing you are providing a healthy cat food is to prepare it yourself.

Before you throw your hands up in horror, saying you don’t know how, you don’t have time, that’s where I come in.

I’ve done the research for a balanced, healthy cat food.

I’ve made all the mistakes and can show how not to fall into the traps I did.

By feeding your cat a healthy cat food, you’ll have fewer trips to your veterinarian and your cat will live longer.

How to have a naturally healthy cat.

« Previous Post Why are Cat Health Problems on the Increase? Next Post » Diabetic Cat Food – How You Can Reduce the Need for Insulin