To discover how to get cats to stop fighting, first you need to understand the causes. Only then do you have the information to stop or resolve the behaviour. This applies to your own cats, rather than the neighbourhood cats, as often you have no ability to solve that problem. 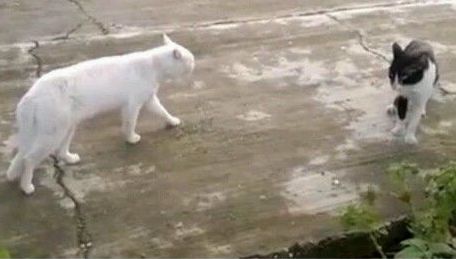 Cats fight for various reasons. Some of these reasons are obvious, some less so.

Natural Fighting
Probably everyone knows that entire tom cats will fight each other when there is a female cat around in season. That’s natural. It’s all about the best man winning, showing his strength and abilities to the female cat. His kittens are likely to be strong and healthy, so it’s worth her investing the time and energy in bringing his kittens into the world.

Finding another cat on what the cat deems as their territory may result in a spat more than a fight. It’s more about establishing boundaries than doing harm to each other. The noise they make in doing that, isn’t very welcome in an urban setting, but it is more a case of the ‘bark being worse than the bite’.

Other than that, there is no natural reason for cats to fight.

A dominant boy cat, even if sterilised, is still likely to intimidate other cats, often just by his presence, but also by his actions, when he deems it necessary to keep the neighbours in check. But fighting would be rare. Fighting is dangerous and animals don’t enter into dangerous activities without very good reason.

Unnatural Fighting
Keeping cats exclusively indoors is not natural. It may be the only safe way you have, but the fact remains. Free access outside, in a safe environment, involves running around, climbing trees, chasing flies, sleeping in the sun, playing with anything that moves.

These natural activities keep these cats content. They can avoid the other cats of the household if they so wish.

Inside, they may be bored. They may not be able to get as far enough away from the other cat/s as they would like. Different personalities can grate on our nerves. Mostly this happens a lot less when the cats are different sex.

Toxins Lead to Aggression
Indoors is a synthetic environment which carry environmental toxins. Toxins are everywhere now, and it’s getting worse. Your furnishings, the paint, the cleaning products can all be toxic. Your cat is subject to this 24/7. If the weather is too hot or cold, there is little ventilation to remove these toxins.

Cats are much more sensitive to toxins than humans, so what doesn’t bother you may well bother your cat.

To rid the body of toxins, the liver has to filter them out. This puts an unnatural and heavy strain on the liver. The liver is the seat of anger. So is it any wonder cats get angry enough to fight?

Common Toxins
Other common areas that causes toxicity are the diet you feed your cat and the veterinary drugs you expose them to.

Commercial cat food, especially the dry food, is loaded with synthetic chemicals that pose as vitamins and other nutrients. But they are unnatural and toxic. The preservatives, that are listed as ‘antioxidants’, or not listed at all, are too toxic to be allowed in human food.

All veterinary drugs, including vaccines, are synthetic and so toxic. This loads up your cat’s body with more to filter out and eliminate. The strain can be immense. Most of us know how we feel when we are under unnatural strain. We tend to lash out at others far too easily. The same happens with your cat.

Examine every area that could be contributing to the problem. If you truly want to know how to get cats to stop fighting, you have to leave no stone unturned.

Discover the natural, easy solutions for all your cat’s health needs.