Lymphoma in cats, just as in anyone, is a cancer of the lymphatic system. It is sometimes called lymphosarcoma. It is a common cancer in cats, making up nearly one third of all feline cancers. 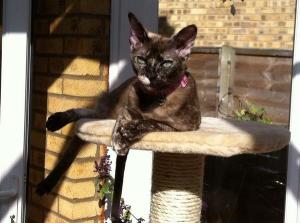 The lymphatic system works throughout the body, transporting and cleansing. It is involved with the defence mechanisms of the body, maintaining immunity. So obviously it is an incredibly important part of the body.

Feline lymphoma is not specific to any breed or sex. But a cat who has feline leukaemia is much more likely to get it. As is one who lives with smokers.

The common symptoms that indicate this distressing problem include:

Multiple organs are affected, namely the spleen, the liver and also bone marrow.

Various forms can occur, according to where the primary sarcoma is situated. Thymic (or mediasarcoma) occurs in the thymus. Sometimes fluid can accumulate around the lungs, which cause coughing and breathing difficulties.

Alimentary lymphosarcoma occurs in the digestive tract, ie the stomach, intestines, liver and spleen, with the associated symptoms.

Extranodal (or miscellaneous) lymphsarcoma can occur in the eyes, the ears, the nose, the kidneys, the central nervous system, the heart or the skin.

Veterinary treatment consists of removal of the tumour with surgery, chemotherapy and drugs. Their prognosis is generally poor. And for good reason as none of these treatments address the cause and all of them further suppress a severely damaged immune system, making recovery unlikely.

Lymphoma in cats, as in anyone, is a direct result of poor living conditions which prevent a healthy immune system. Mostly the fault lies fair and square on the diet, but much also comes from the current veterinary treatments.

The common commercial cat foods are high in toxins, low in quality and is, for the most part, unsuitable for the species. By its daily intake, this is the most common culprit and the immune system never has a chance. Vets sell commercial pet food, because their colleges are financed by Big Pet Food. This means they have a large say in what passes for nutritional education. There is no such thing as a free lunch, and the corporations are paid handsomely in the graduates recommendations.

Veterinary treatment never addresses the cause of any condition because, for the most part, they don’t know. Vet schools are also partly funded by Big Pharma, so they too, have a large say in what passes for the education – diagnose a condition and match it to a drug. But the drugs merely mask or suppress the problem, rather than curing.

If you want to prevent any serious disease in your cat, the only way is the nurture their immune system. This, and nothing else, is important. How do you achieve this?

Lymphoma in cats could disappear overnight if everyone adopted these practices. If you can’t manage them all, then at least address the diet. Feeding your cat a natural, quality, healthy diet can mean the difference between a short and diseased life and a long, healthy one.