Homeopaths are generally well trained in looking for causes of ill health. Causes tend to be whatever was happening in your life when the condition started. This is easy to see when an injury causes a wound. But it becomes more difficult to see when it’s an emotional cause, a medical cause or the problem started many years ago. In this instance, it was an unusual skin disorder.

In pets, the common site for a vaccine is at the shoulders. Year after year, the same site is used. Consideration to the repeated vaccines as the cause of tumours that can form at this site, should always be given.

But health problems aren’t always acquired. They can be inherited, too.

One of my cats, Lexy, recently had an unusual skin disorder. A small skin eruption developed at her shoulders. This was obviously very itchy as she scratched it til it bled. Then continued to scratch it until she had made a small, raw area.

Initially, I just observed what was happening. However, as the condition deteriorated, I had to do something. Exactly what, I was unsure because this was only occurring in an isolated spot.

Although I did consider a vaccine as the cause, Lexy has never been vaccinated. I don’t vaccinate. I never have, even when I didn’t know what I know now. Somehow, something always help me back.

Had she been vaccinated before she came to me? She, and her litter mates, were left at a pet shop where I used to collect the numerous unwanted kittens and take them to a cat’s rescue home. Somehow, Lexy ended up at my home, rather than the cat’s home…

I know the pet shop in question did not vaccinate the pets they sold, let alone the pets they considered surplus to their needs. It’s so unlikely that someone will vaccinate kittens they dump at a pet shop, that I feel confident to say Lexy has never had a vaccine in her life.

I tried various homeopathic medicines that are good at resolving itchy skin eruptions. They helped initially, but then relapsed. And subsequent dosing didn’t have the same effect.

There was something I wasn’t getting.

So I went back to the vaccine theory. Perhaps she had inherited this problem from a vaccinated parent or ancestor?

I had to try this idea out.

I dosed her with the feline vaccine remedy. This is made from the vaccination itself. You can make a homeopathic remedy out of anything and making them from the drug that caused the problem, although not always necessary, can be very helpful.

It started to clear up. It healed up better than it had before.

She did need a few doses, but each one took the healing on to another stage.

Now it has almost completely healed. All that remains is for the fur to grow back.

Bearing in mind the origin of this medicine, it is unlikely that the cause of her health problem was anything other than a vaccine in her family history.

Lexy’s skin eruption, not at its worst, but after she had started scratching again 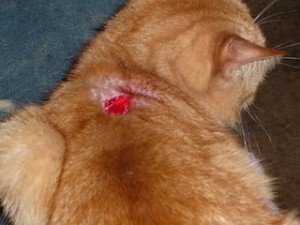 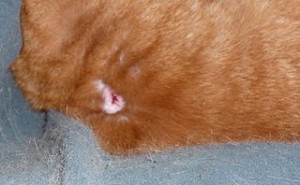 Discover how homeopathy and other natural health measures can help your cat.