Urinary tract infections in cats are, sadly, common in domestic cats. And for one very good reason which veterinarians are never taught at college. Wild cats will never be prone to this problem, which indicates that humans and our misplaced ideas are the cause of the problem. 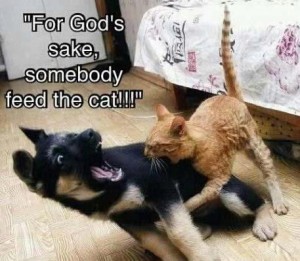 Your cat’s urine pH is critical in their ability to prevent UTIs. A far cry from healthy human urine pH, a healthy cat’s should be acidic, between 6 and 6.5.

Acidic urine accompanies general acidity in the system. This can only come from a diet high in animal protein.

Likewise, alkaline urine accompanies general alkalinity in the system. This can only come about from a diet high in plant food.

Acidic urine is unsuitable for bacteria to live in. So infections can’t survive. No UTI.

Cats are obligate carnivores, which means they must have animal protein in their diet if they are to remain healthy. It should make up nearly the whole diet.

Virtually all commercial cat food contains very high levels of plant based food, whether it is cereal or other plant based food. The reason for this is that meat is expensive and plant food is cheap. Commercial pet food corporations are only interested in one thing, and it’s not the health of your cat. Plant based food is much cheaper than meat. You join the dots…

Cats lack the ability to metabolise plant based food. They have adapted over millenia to be highly successful hunters. This means they have a light body structure and weight, allowing them to pounce and creep noiselessly, allowing them to sprint very fast for short periods.

To this end, cats have sacrificed some of the abilities that dogs have, for example, such as the ability to metabolise plant based food. Dogs are generally pack hunters, whereas cats are lone hunters. They and they alone are responsible for whether or not they eat. They can’t rely on the skills of other cats.

The other reason that urinary tract infections in cats is not common in wild cats, is that they naturally don’t drink much. Most cats originally come from desert or arid regions of the world. Although prey animals migrate to follow food and water, predators tend to remain in their territory. This means they must adapt to the prevailing conditions.

Cats have developed a system that doesn’t need much water to drink. Instead, they get their liquid needs from their prey. A domestic cat fed dry food will rarely drink enough to make up the shortfall of liquid intake, leading to chronic dehydration. A dehydrated cat will not urinate much, preventing the elimination of crystals and toxins. And so they build up.

The combination of a diet high in plant food, a dry diet, an unbalanced diet (inevitable when one ingredient is out) leads to irritability in the renal system, encouraging the growth of bacteria, crystals, toxins and blood which may end up as a blockage and so a veterinary emergency.

Prevent such blockages occurring. Prevent urinary tract infections occurring by feeding your cat as nature intended. And it won’t just be the renal system that benefits. Such a diet can prevent serious chronic disease, because it automatically improves your cat’s immunity.

You can easily test your cat’s urine pH value with pH paper strips available from chemists or online. If it is 7 or higher, your cat is heading for trouble.

« Previous Post What Is The Best Cat Food? Next Post » Cat Vaccinations And The Harm They Do