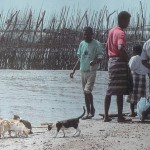 Listening to animals is not a popular pastime for many. As humans, we are so preoccupied with the logical side of our brain, and the ‘doing’ nature that this entails, that we normally completely miss the subtleties of life that surround us every day, or the ‘being’ of our nature.

There’s a saying ‘instead of cursing the dark, light a candle’.

I know I’ve talked about this before, and probably will endlessly, but if you were ‘kept’ by a well meaning giant, who was kind, but you couldn’t communicate with at all, how would you get your message across? Would you ultimately get frustrated, angry, even aggressive sometimes?

Body language is what everyone uses all the time, in addition to words. We have learned to focus on the words, which can be unreliable. But body language is unconscious and never lies. Eyes are one way to easily see if someone is lying, which is why some cultures hide their eyes when talking, especially when doing business deals.

Animals use body language just as much as we do, but sadly, most people don’t take any notice of it.

Yet it is by taking notice of body language that we can tell what an animal is trying to say. What other methods do they have at their disposal to try to make us understand their needs?

My favourite example is of a dog being dragged into a vet’s clinic, tail between his legs. Isn’t the message clear? Can an animal make his point any better?

HE DOESN’T WANT THE TREATMENT!

Yet, the great, arrogant, ego driven human takes no notice at all, firmly believing that we know best, and the dog knows nothing.

Recently, a woman rang me for a consultation about her aggressive cat. This was a young cat and she had only recently started the behaviour of attacking the woman’s legs, biting and kicking much more than is acceptable in play fighting.

The woman had searched the internet and come up with various sites which tried to sell the idea the cat was just ‘acting up’, whatever that means.

She was wise enough to understand that this was unlikely. Instead she arranged for a consultation.

We couldn’t pin point the exact date this had started to happen, so I decided we had to start with the basics. Let’s get the diet sorted out and see what happens. Commercial pet food is one of the main causes of health problems. At the same time, I posted some supportive treatment to undo any damage that may have occurred from the vaccinations and sterilisation, both areas that can knock health badly off balance.

She emailed me before the treatment arrived. She had noticed the start of a change in her cat’s behaviour after just two days, with a big change after six days.

She had been told by several people, including her vet, that this diet was unacceptable. Yet it healed the problem. In her heart, she knew it was the right thing to do, she just needed someone to confirm her feelings.

Inside, we all know what is best, but are easily swayed by those in authority. Perhaps it’s time to let the influence of the powers of authority go. Accept that they may or may not have something useful to offer, but this must resonate with you. If it doesn’t, let it go.

You have inner wisdom. You may not know it or use it, but it is there. It’s simply a matter of accepting it, using it, making mistakes, then appreciating what it brings to your life.

Authority figures have their own agendas that may not support you and your dependents health or best interests. Take responsibility for your life, don’t give it to someone else.

Here are some suggestions when dealing with animals.

1 – Accept animals as equals. They may be different, but they are not inferior to us in any way.
2 – Put yourself in their shoes.
3 – Learn to read body language.
4 – At all times, keep your cool. If you find yourself getting irritated or angry (or judgmental), drop it and come back later.
5 – Don’t think you have all the answers. Animals can teach us much if we bother to listen. Accept that you may have to stretch the boundaries of your mind into uncomfortable areas, sometimes. Being uncomfortable is OK, just acknowledge it.
6 – Learn to understand the species world. For example, dogs are pack animals. They need a natural leader and a pack (you and the family). A dog on his own is miserable. Cats are lone animals. Although they may enjoy a companion, they don’t need one as dogs do. Horses are herd animals and are happiest with at least one other companion. Rabbits also need companions. And so on.

After looking through the list, I decided it wasn’t a bad way for dealing with people either.

Animals will always tell you if you have the most appropriate treatment and remedy. But cats can be harder to read, than say dogs or horses. Watch out for the subtle signs. Despite the alcohol content of a homeopathic liquid remedy, few cats reject it, if the remedy is the right one. Cats love homeopathic treatment, just as everyone does, when they have felt the effects.

Listening to animals connects us more with ourselves, too.