Periodically, I receive such a wonderful story from a reader, that I am left without words to describe my feelings. Here is one such story from Roswitha v. Andersheim about her cat’s near death experience.

Alongside a large orchard in northern Wisconsin, a country road has allowed irresponsible owners to drop off their now unwanted cats. These have become wild, and generated more cats, which occasionally find their way to our farm, where they get live-trapped and taken to a shelter.

One morning, my son was working in the barn, when a small kitten jumped out from under a box, quickly ran up to him, brushed against his hand, and as quickly ran back under the box. With that gesture, the kitten had adopted us.

Several days and feedings later, I took the kitten, now accepting my touch, to the city, where I reside. He became a very happy cat, was neutered for any eventuality, and was a daily entertainment for our family, as we were for him.

Very limited income forced me to feed our “cattipuss”, now called Moli, to have to eat only dry, commercial catfood.

One evening, Olimoli became very sick. He had apparent urinary tract blockage. After five hours of moaning, screaming and growling at himself, we found an emergency vet clinic at 2 in the morning.

The vet suggested keeping him for “36 hours”, in order to intravenously poison him with chemicals, take repeated blood tests, x-rays, and of course, sedatives, to keep him from screaming too much. He said, “It would cost $1500”. I was outraged, not only at the price of traumatizing the animal, but the blatant incompetence of another medical practitioner.

Then, the titled academician suggested that he “put him down”, as that was “the only alternative”. His pathology-oriented avarice came to $140. I took my crying, and alternately purring, Olimoli home again.

So, I considered my own occasional body dysfunctions, and thought of hot water, on, or in, the affected body part. “In” was out, I tried that, but he wouldn’t drink. The only option was a hot semi-bath.

My son and I held him in a small tub of water (106-110 degrees F), Olimoli’s back end held down with my hands on butt and middle, while my son contained his front paws, keeping him from jumping out. Moli screamed and protested, but eventually calmed down, and we did this three more times within the next day.

Olimoli slept for several hours after each bath, and at one point seemed to have small seizures. At that instance, I thought, he’s not going to make it, so let’s heat him some more, and he had another hot immersion. This time, he did not complain, and sat in the hot water for fifteen minutes. Then, he slept through the night, and the next morning, walked into the kitchen, as if he had just been on a mouseless hunting expedition: He meowed that he was starving.

I had bought some fresh bison (swearing to myself, never to feed another animal dry commercial food), mixed the bison with a little yeast, and a sprinkle of diatomaceous earth, all squished in spring water (because I assumed dehydration of sorts). Olimoli purred his thanks, as he inhaled the food as fast as his tongue could slurp it. 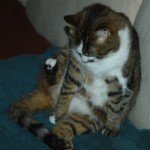 Now, with homeostasis once more established, here is a picture of Olimoli taken after a hot bath, and another, after his recovery, where he is watching people and birds from a window. 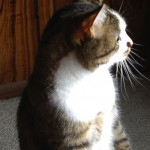 As with other animals, we had to learn again, that it is imperative, to adhere to the natural diet of each animal species, and not to try to accommodate the exigencies of our own lifestyles. Moli would certainly not have survived the veterinary treatment.

This, once more, led us to pay attention to our own feelings about any problem, and attend to an honest assessment, instead of the conventional subservience to modern, greed-generated advertisement of remedies.

The general, worldwide dis-eases of man and beast are commonly addressed with invasive treatments, including pharmaceutical intervention. These treatments are, at best, nothing but cover-ups or camouflages of symptoms, and at worst, poisonous and deadly. This is the “best” modern medicine can do, while the real source of the disease is ignored, until it is often too late.

When a physical discomfort becomes apparent, it is necessary to do a mental assessment. Where does it hurt? Is there an external reason: Is the diet at fault? Is there an injury? Then a more thorough assessment of possible causes follows.

Finally, what do we know about the body? Do we know about, how it functions, where the vital organs are, etc.? It is not necessary to have studied anatomy for this assessment. It is, however, necessary to have a cursory knowledge of bodies, on the whole. If one does not trust oneself, to make such an assessment, one seeks the first professional, and gets a diagnostic opinion. As in the example with Moli, the choice of deciding whether or not to follow the professional advice, is up to the informed owner.

Hence, if we, the consumers, want to change the approach of the medical professions to the treatment of disease, it is absolutely necessary, to be continuously informed about the alternative methods, and why they are effective. Not every herbal or folk remedy is an answer, and not every allopathic remedy needs to be spurned. Information, thoughtful reflection, and consequent action are necessary.

Yes, it takes time, and yes, it is on-going. But, unless we take responsibility for our own bodies, and those entrusted to our care, the easy way out will remain a trip to the nearest health-care facility.

It is with sadness and some resignation, that the plainest answers to health questions fall so often on the ears of brain-conditioned individuals. Fear, ignorance, and consequent lack of trust, keeps each of them on the path to eventual, debilitating deterioration.

I believe that a widely spread educational effort must be made, without any resignation to the status quo, to bring all of us out of this morass of commercial hype, misinformation, and conditioned indoctrination!

As Roswitha  v. Andersheim points out, be conscious of what you are doing. Olimoli could easily have escaped from the bath, as anyone knows who has a cat. Two mere humans is no match for a determined cat, even an ailing one. Further information on how you can learn to help your cat, and you, in emergencies.

2 replies to "Olimoli’s Near Death Experience"