Cats have natural, recuperative abilities that have served them well for millions of years. But in our fear based, over-medicated world, this is rarely allowed. Oddly, the neglected cats often fare better than the ones in the most caring families. 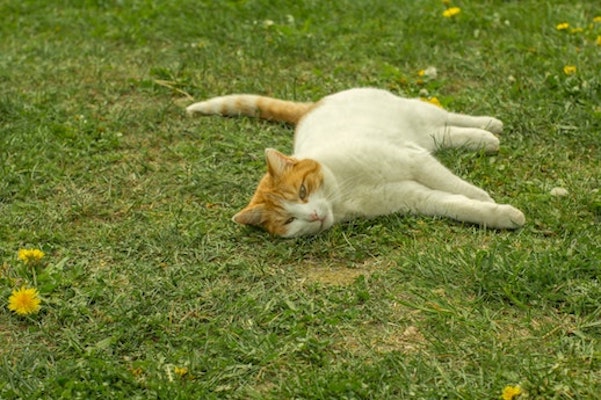 Some years ago, I was told about a documentary film which focused on the recovery of soldiers from their battle wounds. The field hospitals would be overloaded with injured soldiers after a skirmish. The surgeons had the task of separating the injured into categories – those that needed immediate help and those that could wait.

The conclusion was that the innate ability of the immune system knew best how to help and heal the body. The initial, stabilising affect it had resulted in higher numbers of soldiers recovering.

How I wish I had asked for the name of that documentary.

Then I heard about a cat who had been bitten by one of our local poisonous snakes. The family couldn’t pay for the exorbitant price of the veterinary treatment, so the cat was given the freedom to do what comes naturally.

She chose a quiet, sheltered spot in the garden, curled up and went to sleep for three long days. Apart from taking a discretionally peak occasionally, she was left alone.

When she emerged, she was back to her normal, bright and healthy self.

She knew what to do and she definitely didn’t want any food, which takes a long of energy to digest. Energy that was needed elsewhere.

Over Care Can Be Detrimental

Our domestic cats are rarely allowed to do this. We constantly monitor them and often they don’t even have a safe hideaway they can retreat to in times of need.

Often, at the first sign of a health issue, they are whisked off to the vet to be given the standard round of antibiotics. Antibiotics which kill off all bacteria, affecting the digestion and killing off the bacterial defenders that police the orifices, safeguarding against entry of unwanted pathogens.

Antibiotics which are so routinely prescribed, often without an infection being present.

The Immune System Is King

Instead of worrying about acute diseases, which mostly heal themselves, it has more value to care for the immune system. It’s the immune system which has the ability to restore health whatever the problem.

How do you ensure your cat has a strong immune system?

By taking care of their natural needs, which include:

It is impossible to have a healthy immune system when the nutritional needs of the species is not being met.

It is impossible to have a healthy immune system when the cats natural instincts to heal are denied.

It is impossible to have a healthy immune system when it is constantly under attack from suppressive veterinary drugs, which have the effect of silencing it, rendering it unable to put up any defence action in the hour of need.

Cats have natural recuperative abilities which are powerful. When they are allowed free rein, your cat can be much healthier and at a fraction of the cost.

Focus on strengthening the immune system and learning to understand what symptoms tell you. There is no need to be fearful. Then you’ll learn to differentiate between when to leave well alone and when action is required.