Skin disease in cats is quite common. And when you understand the reasons behind this, you’ll understand why. 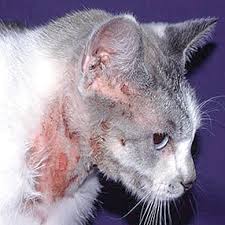 In a way, the skin is the least important organ of the body. Comparing its function with that of the liver or kidneys say, skin complaints have much less impact on a body’s overall health. When the liver is unhealthy, the impact is far greater. When the skin is unhealthy, it simply looks bad, or perhaps itches.

Unfortunately, the way of the world at the moment, admires good looks above everything else, or so it often seems. So every skin condition is swiftly suppressed by medical and veterinary chemical drugs. When the skin looks healthy, people are happy (including vets), even when the internal health deteriorates.

Natural health therapists understand that Nature is wise, intelligent and that every living being is perfectly capable of healing themselves, when they are in natural balance. So when a skin condition appears, there is a very good reason for this.

This means if you can get behind that reason, you have a good chance of not just healing the condition, rather than suppressing it, but preventing it from recurring. In other words, restoring natural balance.

Skin diseases in cats, as in anyone, are, almost without exception, a result of a highly toxic state. Eliminating toxins from the body through the skin has the least impact on overall health. So is the body’s preferred route.

So what are the toxins that your cat so desperately needs to eliminate?

We live in a very toxic world. Everything is more toxic than it ever was. Even the air we breathe, especially if you live in suburbia. To some extent cats, along with everyone else, can deal with toxins, even though we have not evolved to. But it’s the highly loaded toxins and their regular intake that has the biggest impact on their, and our, health.

Commercial cat food is not only highly toxic, but also nutrient deficient, so adding a double whammy for its feline consumers. The toxins come from the preservatives inevitably added, despite claims to the contrary. Preservatives that would never be allowed in human food, such as ethoxyquin and formaldehyde.

Cats are far more sensitive to chemicals than humans, so this causes them huge problems. The daily ingestion means the toxins build up over time, slowly. Only aware people recognise what is going on. Most are oblivious.

Toxins in commercial cat food also comes from the addition of the synthetic (cheap) vitamins and minerals. These are added in some attempt to address the shortfall of nutritional food. Mostly, synthetic nutrients are not able to be utilised by cats and simply add to their chemical burden.

The other toxins that contribute to skin disease in cats is veterinary drugs and vaccines, which are chemicals. All chemicals are toxic to everyone and the annual vaccinations so many cats receive, not only adds to their chemical load, but also undermines their immune system. 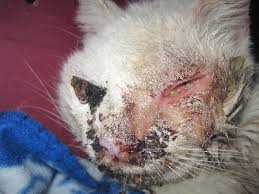 The veterinary treatment of cat skin disease invariably means suppression, which adds to an already burdened immune system and does nothing to address the cause. Antibiotics and cortisone are very damaging to a cat’s overall health. Topical treatment should be avoided as the problem is internal, not external. Elizabethan collars are stressful to any cat and should be avoided.

Cat skin diseases can be prevented or fully healed (in some instances) if you simply stop the intake of toxins.

Natural, healthy cat food doesn’t come in a packet or a can/tin. It comes from understanding the nutritional requirements of cats and providing it.

Some cats, especially those whose immune system is struggling and who are not able to recover themselves, even after a cessation of toxins, may need some help. By using natural therapies, such as homeopathy, for all your cats health problems, not only do you NOT add any toxins, but homeopathy works by restoring natural balance, thereby promoting a healthy immune system.

Two major areas that contribute to a healthy, happy cat. However, do be aware that the true healing of skin disease in cats is likely to take time. This means it is best not to expect overnight success. A gradual and sustained improvement is the best way, so stay in touch with your homeopath as this evolves.

« Previous Post Cat Vaccines – Does Your Vet Tell You the Truth? Next Post » Feline Diabetes – Is Insulin the Only Answer?

2 replies to "Skin Disease in Cats – Causes and Natural Solutions"